Last Thursday (20th of May) I participated in an interesting workshop about citizens and animal welfare.  The workshop was organized at Aarhus University in Denmark and dealt with questions like: Whose opinion on animal welfare counts? How can one integrate the different perspectives of,  for example farmers, citizens, (animal) scientists and the government? We already know that citizens consider animals’ ‘naturalness’ a very important feature of ‘good animal welfare’. But what is naturalness exactly? Can you implement this in animal farming systems? Can you measure it? And what if the choice for naturalness is in conflict with other aspects, such as animal health? How do citizens make trade-offs between such dilemmas in animal farming? And how should one involve citizens in animal welfare research? Via surveys, farm visits, consensus conferences or are there other ways to be explored? To be short, although much research has already been done on animal welfare over the last decade, there are still many questions surrounding the animal welfare debate when it comes to citizens’ participation and involvement. 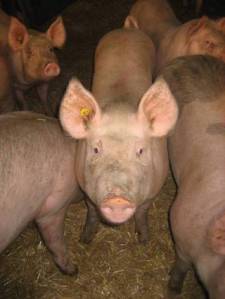 Raising new questions is of course a characteristic of research: finishing a research can give you the feeling that you answered some questions, but in the end it will always result in more questions. That’s what keeps us going. What in addition keeps me going, is the cooperation and discussion with other researchers in the world. Particularly after doing a PhD for six years on my own, it is really nice to exchange ideas and cooperate with other researchers in this field, like Jan Tind Sørensen of the Department of Animal Health and Bioscience and Peter Sandøe of the Danish Centre for Bioethics and Risk Assessment . During my PhD I often had the feeling I was one of the very few researchers who is interested in public perceptions of animal farming. But recently, the importance of the public opinion of animal farming is more and more acknowledged, also in the field Animal Science, of which this workshop was a good example.