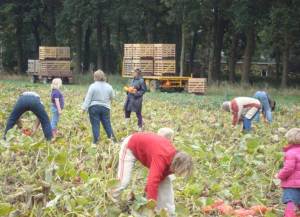 During the nineties, we, urbanites, discovered the countryside anew. Farmers opened their stables and greenhouses for excursions, recreational activities such as ‘farm golf’ and camping at the farm became popular. That these farmers also produced food and where that food went to, was not so much considered. Often also not by the farmers themselves. The onion in bulk to the wholesale markets, the milk to the factory, the consumer at the farm gate for recreational activities; multifunctional farming. However, more and more the connection to the consumer happened through food too. Veggie boxes, fresh dairy directly from the farm. In small, it was always there already, but it has grown in public awareness ever since. Local food is now celebrated in magazines, in the supermarket, at the market, at fairs, in the newspaper, in policies.

Amory Starr (2010) argues that ‘local food’ indeed can be seen as a social movement. She writes ‘I see social movement culture functioning as a process of recognition, query, and expansion, repetitious, slow, but growing bigger in each conversation. Consumers join box schemes for a variety of reasons, which a critic might see as political inadequate. (…) [but] its more important effect is hegemonizing a new cosmology (or paradigm)’ (p485-486). We did discover farmers anew and are discovering food anew. And thus the place of food in our direct environment, cities. The amount of people inspired by the association with ‘urban agriculture’ and who would like to do ‘something with’ urban ag is far bigger than the current practice. Some urban food projects quickly turned into iconic symbols of this new discovery.

We can now book guided tours through Amsterdam, where we can see the history of food materialised in the architecture of ancient warehouses organised by CITIES/Farming the city. Or participate in ‘Green Soul’ city tours in Rotterdam. It is all part of the ‘conversation’ argues Starr and the awareness growing. However, Holt Giménez and Shattuck (2011) are not so sure that these ‘rumblings of reform’ are enough to transform the food regime into a more equitable food system. “The tranformation of the corporate food regime would require a major shift from societies embedded in the market economy to economies and markets that are embedded in society.”(p136-137). Indeed, a difficult question for food movements of all times also Starr recognises, is the relation between social movements and market economy. Since society is market nowadays it is hard to shout from the outside while changing through the market might not change the fundamentals, as Holt Giménez and Stattuck point out.