At the end of October I had the opportunity to meet a large group of social activists involved in the development of Farmers’ Markets in Beijing. I gave a short presentation in a meeting with some 150 people (see the announcement). It took place in a cinema with my Power Point Presentation projected on the screen normally used for films. The good thing was that the projected images were now up to 5 times larger than me myself. I felt reduced to the right proportions. Afterwards we had a lengthy conversation on the construction of new markets, peasant agriculture and new peasants. The nearby Farmers’ Market (that frequently changes location: it travels through Beijing) impressed me very much: it was, as it were, a perfect illustration of the discussion we had inside the cinema. Many peasants, many new peasants as well. 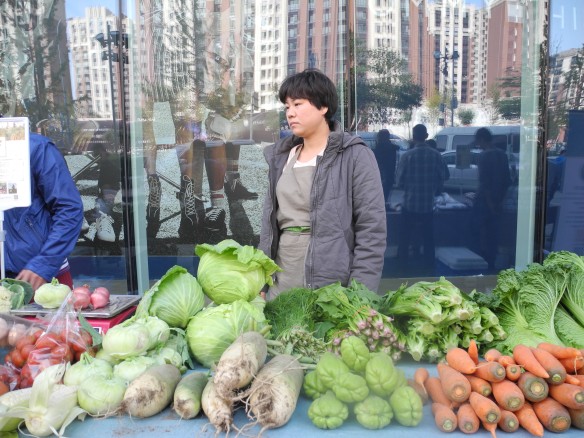 The latter often are middle-aged people, previously well-paid urban professionals who became fed up with the stress and monotonous routines of their jobs and who saved enough to change trajectory. These people start new farms, mostly in the periphery of Beijing and use the Farmers’ Market as one of their outlets and as a main channel for communication. It is a good way to become known amongst consumers. Interestingly this is double: Shopping Malls like to offer space to the Farmers’ Market, since it attracts many consumers (mostly young, elegant, well-educated, interested, curious and with sufficient purchasing power). Therefore the Malls offer a ‘protected space’ to the Farmers’ Market hoping that part of these consumers will visit the mall as well. These are exciting new combinations. They are actively constructed by the involved activists (and social entrepreneurs as some of them call themselves). The periphery of Beijing is anyway a place were a lot of things are happening. There are entire villages over there specialized in a kind of agro-touristic or ‘short chain’ arrangements that link producers and consumers in novel ways. The small farms grow a wide array of vegetables and fruits (and have chickens and other small animals as well). Citizens come (often with their children) and pick themselves the fruits and vegetables they want to bring home. But you can also order your own meal and consume it here. Then the farm turns out to be a small restaurant. These farms really are chameleon-like (I think that is a better word than the awful term we use in the West: ‘multi-functional’). They change and adapt according to the circumstances and arising needs and opportunities. It is also interesting that many of the original farmers of these villages stopped and took better paid jobs in Beijing. But then, other farmers from further away (elsewhere in Hebei province) move in and continue the farms. So it is people from the deep rural areas as well as people from the heart of the urban conglomeration that both move to the periphery of the this enormous city.

The periphery is not anymore the space that passively awaits further urban expansion. It is, instead, becoming a laboratory that develops new arrangements that link town and countryside in new and often powerful ways. It is often argued that such new arrangements are only accessible for the rich. The development here tends to illustrate the opposite. If you take everything together you rather see a multi-class phenomenon. Indeed, the better-off shop on the Farmers’ Market. But then, it is middle-class (including lower middle class) that engages in fruit and vegetable picking. It is a rich palette that is increasingly entailing temptations for each and everybody.