We firstly visited the multifunctional farm ‘Eemlandhoeve’ of Jan Huigen. In

an inspiring talk, Jan explained about the development of the Eemlandhoeve and the future plans. The farm has different functions, such as care farming, recreation, herb production, beef production and education for schoolchildren. After a nice walk around the farm and the calming farm yard (see picture), we walked to the neighbouring farm. 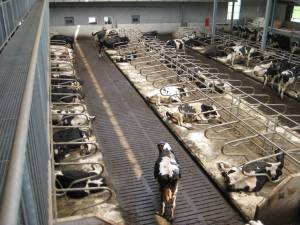 The neighbouring farm ‘Hoeve ‘t Witte Schaap’ follows another path of development: a large scale dairy farm, with about 300 dairy cows and four milking robots. For most students, it was the first time they visited such a large dairy farm. The shed is large and high, with a lot of light and fresh air. Gerrit (the farmer) talked engaged about his farm, including the technology and animals. Two workers take care of the cows and by feeding them and looking after their health. The cows are fed with grass and maize of the farm and hardly received any concentrates (only in the milking robot). The farmer applies all the manure on his land. In fact, his way of farming is not that far from organic regulations.

After both visits we gathered, where Drees of ‘Willem & Drees’ gave an inspiring talk about regional production and sale of fruit and vegetables in five regions the Netherlands.

During the discussion, the students raised interesting questions. Firstly, one of the students asked Jan Huigen ‘How much of your income comes from food production?’ This – of course – was a limited amount and several students seemed concluded that he was not ‘a real farmer’, but more an entrepreneur in the countryside. Thereafter, the large scale farmer was asked how often he was actually among his animals, which was limited, since he had two workers to take care of the animals. The students seemed to conclude that he was neither ‘a real farmer’, because he had limited animal contact. Instead, he was more a ‘manager’.

To conclude, it was an inspiring excursion, which showed two very different development paths of contemporary farming in the Netherlands and gave students a great opportunity to think about the question what a farmer is nowadays.