Growing food in public spaces can be a great awareness raising campaign. A beautiful example is given here from the city of Adernach which was in the news this summer at various German tv stations (quite appropriate that the Dutch call the news in the summer “cucumber times”). There are also projects in England such as in Leeds or in The Netherlands such as the one in my neighbourhood (see earlier posts here and here). 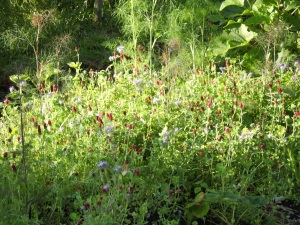 Usually, the initiation phase is one of great enthusiasm, the planning and designing, digging up the lawn and planting (subsidised?) new but this time edible plants, trees and bushes. The proof of the pudding of course, is what follows next. Public space is in theory for ‘the community’, which is why there is such beauty in turning such space into something which benefits all. However there are two potential problems, public space as it is for everyone can at the same time be for no one in particular or the change of the space can exclude some ‘community members’.

To start with the latter, dog owners feel excluded in our edible forest project because they cannot walk the dog and leave the shit where edible things grow. They couldn’t do this before the change because the area was inaccessible due to brambles overgrow and to leave dog shit is anyway forbidden. So why not come without dog? But this is to dismiss identities and neighbourhood use.

In a door-to-door questionnaire held in our hood in May, the overwhelming majority was positive about the changes the once completely overgrown plot underwent. A majority of the residents also ticked some boxes in the long list of potential activities that could be organised such as a meal together, a harvest party and so on. We searched and found new subsidy to support a volunteer who started organising activities in an attempt to let ownership grow since reactions were positive but the use of the space limited. There is reluctance to take from the garden. People feel they ‘steel’ if they take an apple from the tree or cut mint for a cup of tea. To feel entitled and take, but not take all, and maybe even to help maintain seems to require learning a new practice of citizenship.

1 thought on “Edible public space eaten by whom?”