The last week I spent my time mostly in the dark, at the International Filmfestival in San Cristóbal de Las Casas in Chiapas, Mexico, where I am for my internship. The movies and documentaries seem to have a common underlying theme: the disappearance of Mexicans (and many others) and the involvement of the State in this process. 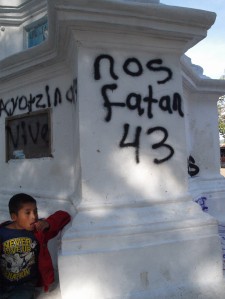 La hora de la siesta (2009) tells the story of the ABC Daycare in Hermosillo, that burned down on the 5th of June 2009. 49 Children died during the fire while they were taking a nap. The State Finance Department was directly responsible for the safety of the building. Retratos de una búsqueda (2014) tells the story of mothers looking for their sons and daughters that got lost in the Mexican narco war. A war that the government started in 2006 under the presidency of Calderón to control the drug trafficking. The Human Right Watch[1] estimates the number of disappearances around 26.000. Mention that this is the number of people missing, the number of killed Mexicans in this ‘war’ is three times higher. Llévate mis amores (2014) is a beautiful documentary that shows the people that try to cross Mexico by hitching on the roof of a cargo train, nicknamed ‘La Bestia’ or ‘the train of the unknowns and dead’. Their wish is to reach The United States where they hope to find a better future for themselves and their families that stayed behind in poverty. Official records of Amnesty International state that thousands of migrantes are ‘lost’ every year during this journey[2] .The federal police and the drug gangs, who have close ties with the government, can be held responsible for the majority of these losses. The 43 students from the State of Guerrero that were kidnapped on the 26th of September 2014, can be added to this endless list. Quite a big chance that there will be a documentary on this disappearance during the next edition of this filmfestival in San Cristóbal de Las Casas. I guess this is what Zygmunt Bauman calls ‘wasted lives’ (2004). People are hidden away, they suddenly disappear and are dumped in sewages. The people in charge decides which lives are to be wasted and which lives are not. What makes these documentaries so beautiful is that they all give meaning to these lives by making them visible. In doing so, they break away from the image of wasted and anonymous lives that the authorities prefer to establish. Las madres de la Plaza de Mayo (1985) shows the movement of the mothers of the children that disappeared during the military dictatorship of Videla between 1976 en 1981 in Argentina. These women come together every Thursday to walk on the most famous square in Buenos Aires, wearing white scarfs around their head and carrying a picture of their loved one in front of their chest. Every single Thursday since 1977. In Llévate mis amores the focus is not on the ‘wasted lives’ that try to cross the border but on the people caring for them. The documentary tells the story of a group of women from La Patrona, a village in the State of Veracruz,  who prepare around 200 meals every day to give to the women and men that try to reach The United States. Traveling on ‘La tren de muerte’, they try to get a better future for their families back home in Honduras, Guatamala, El Salvador, Mexico and other parts of Latin America. When the train passes through their village, Las Patronas stand next to the tracks, reaching their hands out with bags of food and bottles of water. The migrantes, hanging on the sides of the speeding train, grab the bags out of the womens hands while screaming words of appreciation and admiration for their work, care and love. One mother in Retratos de una búsqueda explains to an police official that they are not looking for  lost dogs, the mothers are on a hunger strike to ask attention for her lost children. Wasted lives are seen as lost dogs. The (bodily) protest seems to be the only weapon that the weak have. By camping and protesting in front of the Federal Police Office they claim the public space in order to make themselves visible and heard. Yesterday there was a group of men delivering a speech on the the central square in San Critóbal, asking the audience what they had to do to be heard. They suggested to go after the sons of the police chiefs, the political leaders and the people in power and personally kill them. Wasting the lives of the people that are not accepted to be wasted in order to get attention for their cases. Only later I heard that they were the fathers of the 43 killed students from Guerrero. My housemate works at a day center for street children in the city. The biggest dream for the children is to jump on the train heading to Estados Unidos. The train that will take them out of poverty, crime and violation. A dream in the minds and hearts of the children that you pass by on the street after seeing these documentaries from a comfortable theater seat. Still in shock by the number of ‘lost’ lives on the railroad-tracks heading to the North. All these documentaries tell the stories of the present situation in Mexico. Protests expressed in graffiti on the walls everywhere in San Cristóbal will be covered up with yet another layer of paint, done by municipality workers in the darkness of the night. The next week there will be writings again on the white painted walls: ‘Vivos los llevaron, vivos los queremos!’ and ‘Nos valtan 43’(‘Alive they took them, alive we want them back’ and ‘we are missing 43’). How long can voices not be heard or listened to? According to my housemate, Mexico will explode sooner or later. It will be the only way to make voices heard and invisible lives visible. I would like to hold the belief that as long as the people who care for lives outnumber the people that think some lives are to be wasted, there is a way to change this current situation in Mexico, and the rest of the world. At least it is a thought that could help me out of the darkness that I have been sitting in this week.

Sacha Buisman, a MSc student at RSO, is doing her internship at the Institute for Indigenous Studies at the Autonomous University of Chiapas in Mexico. She participates in the development of the courses ‘Culture, Society and Education’, ‘Urban Studies, Population Movements and Cultural Change’, and ‘Household Farming’.