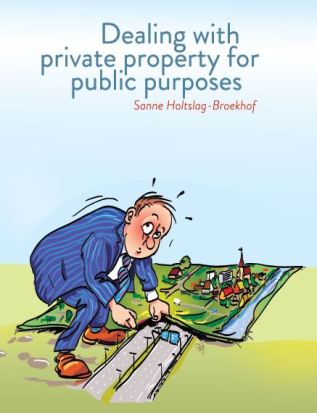 On Monday 6 June 2016 Sanne Holtslag-Broekhof will defend her PhD thesis entitled “Dealing with private property for public purposes. An interdisciplinary study of land transactions from a micro-scale perspective” at 13.30 hrs in the Auditorium of Wageningen University.

The defence ceremony will be streamed live by WURTV but can be viewed later as well. The thesis will be available at WUR-Library after the ceremony has been concluded.

Sanne’s PhD thesis focusses on land transactions between governments and private landowners. During these publicly initiated land transactions, central aspects for landowners are ‘a good solution’ and ‘a feeling of justice’. Ideas on just land acquisition are diverse amongst owners and acquirers, but were related to lawfullness, decentness and equality. During land transactions landowners experience many uncertianties. Landowners deal with these uncertainties by creating expectations and act based on these expectations. The risk to end without replacing land, stops many owners from going to court for expropriation. Yet, a comparison between the last compensation offer during the voluntary negotiations and the final compensation in court shows that the final compensation ends on average 52% higher than the last compensation offer.

Since the economic crisis public parties aim for more facilitative land policy, but have often little experience to cooperate with private landowners. The insights of this research can help public parties to deal more effective and lawful with private property during spatial developments.