The state of Sitopia. Report of the 8th AESOP Sustainable Food Planning Conference 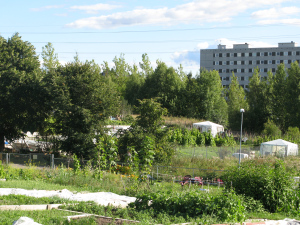 In the fall of 2017 the 8th AESOP Sustainable Food Planning Conference took place in Coventry,  hosted by the Center for Agroecology, Water and Resilience (CAWR). Since its inception in 2009 the Sustainable Food Planning department is one of the most active within AESOP (the Association of European Schools of Planning), indicating that food is back on the urban agenda, at least in academia. As a budding urban agriculture planner and researcher I attended the first two AESOP SFP conferences (Almere, 2009 and Brighton, 2010). Both were exciting meetings where pioneers from Europe and America – not only planners but also initiators, activists and scientists from other disciplines and people like Carolyn Steele (architect and writer of the seminal book Hungry City) – came together to discuss the then relatively new theme. I went to Coventry curious to see how the discussion has developed since those days and what is the state of affairs in the field in international perspective.

In the opening lecture Chiara Tornaghi (CAWR) and Michiel Dehaene (Ghent University) set the engaged tone for the Coventry conference by laying out their vision of an agroecological urbanism. The vision introduces urban agro-ecology as an integral approach to food production within the natural ecosystem on the city. By looking at the city from this perspective, the sustainable ideals of urban agriculture are linked to a political involvement in the development of the city. This involvement was inspired by a Marxist critique of urbanization as a neoliberal project. The variety of scientific presentations during the conference offered both many concrete examples of why a critique is needed (whether or not inspired by Marx) and how urban food initiatives deal almost without exception with questions about social and ecological justice, and choices that determine who is included and who isn’t, and who benefits from all the recent attention to food and agriculture in and around the city.

An agro-ecological urbanism aims not to base the development of the city on the logic of growth, accumulation of wealth and property, but to shape it as an ecosystem in which people and other living beings live in connection with their (ecological) environment, one that not only meets our basic needs, but also respects our rights, in solidarity with each other. The right to food and nutrition is much less about the production of sufficient food as it is about the accessibility of food, and the knowledge and skills and possibilities to grow it yourself in the way that fits you, personally, socially and culturally, as Jahi Chappell, another keynote speaker, taught us. He shared his experience as a participant researcher with food policy in Belo Horizonte in Brazil, about which he wrote the book “Beginning to end hunger: Food and the environment in Belo Horizonte, Brazil and beyond”. An interesting point was his personal plea for reciprocity in the exchange of knowledge and experience between the Global North and South. His involvement in Belo Horizonte was not only about helping to find local solutions, but also about learning and gaining experience that could be relevant and applicable in his own country, the U.S.A.

The Right2Food was also discussed by Emily Matteisen of FIAN International . She outlined recent developments in the recognition of this basic right, the role that (local) government can play in this and the challenges that come with it. In her talk she also touched on the question of whether there actually is sufficient representation in some food (policy) councils, a theme that is also relevant in the Dutch context.
The question to what extent people can participate in how their food is produced came up in the  keynote by Dehaene and Tornaghi (who for the occasion presented themselves under the symbiotic acronym DehTor) as well. They used to the Marxist concept of social reproduction; the ability to pass on knowledge and skills to others, through time, to critisize post-war urban development. According to them, since the Second World War urban planning and design has done its best to ban the knowledge and skills related to food from the city, and has transformed us into consumers who know less and less about food. Thus it has deprived in particular people with less money and or social access of opportunities to provide in their own food.

Food knowledge and skills were traditionally linked to shared access to shared resources (land, tools, knowledge). The commons were a recurring theme both in the plenary lectures and in the sessions I attended; the ways in which access to shared resources (land, resources, knowledge) can take shape in the urban food system. A French study by Baisse-Lainé, Perrin and Delfosse showed how land is claimed and managed as a common resource. Both (local) governments and social initiatives such as Terres de Liens try to create and / or maintain land management for small-scale agriculture. The government does this in order to maintain landscape quality, in other words to prevent unwanted urban development. Civil society organizations are concerned with fair access to land. Interestingly, these different perspectives lead to similar approaches that often go back to old forms of (existing or former) commons or that try to reintroduce and reformulate them. In her presentation Debra Solomon proposed to consider urban soil as a commons. Healthy soil is increasingly recognized as the basis for sustainable agriculture. City soil is however still ignored as a common good. The concept of the commons could be used to bring natural resources such as (urban) soil on the agenda both in society and in policy as a shared responsibility.

Now that the theme of food in the city is receiving increased attention both by policy makers and the general public, and more and more citizens want to grow their own food again, it is a challenge to reintroduce the associated awareness and knowledge and skills to a broad group of citizens, as DehTor advocates. However, this emancipation is far from self-evident. “Another world is plantable! Community gardeners in North America”, a film about communal food gardens in U.S.A., shows that social equality can not be taken for granted in the alternative food movement. The film shows the liberating effect of this movement e.g. for people from the LGTB scene. But it also shows the concern that the movement is co-opted, absorbed by commerce, or by the creative white middle class. If you look at the conference from this perspective, a lack of diversity among the participants became apparent with relatively few participants from the Global South, and little ethnic diversity. That was certainly not the intention of the organizers; CAWR explicitly aims to be relevant to a wider group than academics and to play an active role in projects around the world focused on inclusiveness and sustainability. The centre is active locally as well. Coventry is one of the poorest cities in the United Kingdom, with all the problems that this entails. I unfortunately missed the session on the initiative for a local food policy council in Coventry in which CAWR is also involved.

When I left Coventry after the conference, I therefore did not have a clear picture of what was going on locally. This bothered me as I felt this was also my own responsibility. I did however leave with a renewed feeling that something is at stake in working on a sustainable food system. It is a challenge that requires more than the professional solution of a number of problems; it needs a change in mentality and behavior. Such a change can and should be discussed at a conference like this but these discussions are not what stayed with me in the end. It was all the presented examples of people realizing a piece of their desired socially just and sustainable world out there in the real world; working on the sitopia Steele proposed at the end of her book Hungry City. The conference offered valuable insight into the development of these initiatives. Documenting their experiences and charting their successes and failures (evidence-based sitopia?) is one of the most important tasks of science that deals with sustainable food planning.