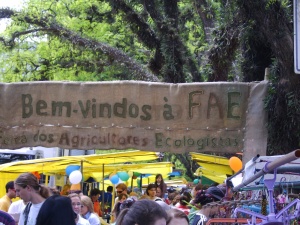 On the saturday of my arrival in Porto Alegre, the “Feira dos Agricultores Ecologistas” was celebrating its twenty-second birthday. The market is situated at the border of the big Parque Farroupilha Redenção in the city centre and is at least a kilometer long. Back then, the market started with a group of citizens in Porto Alegre in search for healthier food both for the environment and for human health. The environment was not something which was considered a ‘political’ issue at the time of the ‘dictatura’. The environment therefore, was a topic for groups to come together and of course, discuss politics more broadly. More than twenty years ago, an environmentalist consumer cooperative  was established which organised a wide network of farmers willing to produce differently which was back then, more of an activist- against mainstream – thing to do than today. The farmers called themselves ‘agricultores ecologistas’, which refers to this activism. They consider themselves different from the broader movement towards organic production which evolved later. The subtle difference between their name and terms like ‘organico’ or other terms such as ‘agro-ecologia’ can easily be missed by a visitor. 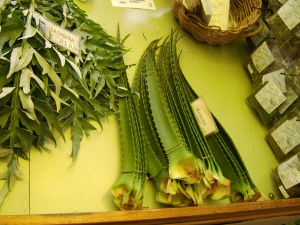 However, these things were explained to me by Flávia Marques with whom I went there and who is one of the professors at the Post graduate program for rural development (PGDR) and who has worked with various of the farmers for years. One of the farmers on the market is specialised in plants for medicinal uses, the topic of her doctorate thesis. Further down the market there was also an empty stand with an elderly woman sitting behind it. Here people can get free advice on ailments also from a natural medicinal or holistic point of view. This week, at the two farm visits near Pelotas, both farmers had an extensive garden with herbs for medicinal use near the house. Also the municipal garden in Dois Irmãos had an herbal garden organised around the various human organs. It is one of the many striking differences compared to home for me. I learned that knowledge of the beneficial use of herbs is widespread and is not limited to organic farmers or ecologically oriented consumers.