The Hopi have many spiritual and ceremonial places and events. We experienced one of these events, a Kachina dance in a village on Third Mesa. In the months of April, May and June, the ‘day dances’ take place. From February until July these dances involve Kachinas. The Kachinas are the spiritual essence for the Hopi, their appearance connects the Hopi to their ancestral spirits, the elements and the universe. The Kachinas are believed to live at the San Francisco Peaks, they appear from February to July in different types of dances. All dances are connected in some way to rain and harvest. As rain is the limiting factor, their religious and ceremonial life cannot be separated from agriculture and food and being Hopi.

The Hopi strongly hold to their ceremonies and traditions and tribal rules. After some experiences with unethical use of material gathered by visitors, one is reminded everywhere that taking pictures or notes of the ceremonies, the people, the villages and the landscape are forbidden. Doing research in this area is also subject to tribal rules. The data collected cannot be possessed by the researcher/ university. It remains with the Hopi and each usage of material has to be negotiated and agreed upon.

Hopi agriculture and gathering were once the sole source of sustenance. Mainly dependent on rain in the high arid dessert of Arizona, the Hopi planted corn, beans, squash, cotton and gourds that were particularly resistant to the drought and pests of the area. We saw cornfields where the corn is now approx 30 centimeter high. It has been a good spring so far, with quite a bit of rain. Corn is planted very deep, with a planting stick around 6 seeds are sown together up to 18 inches deep into the soil. The depth of the hole depends on judgment in terms of soil moisture. Many corn plants growing together could push through the sandy soil. And each bundle of seeds stands 4 footsteps from each other. In between beans are sown as well as squash around the edges.

Hopi ceremony requires a number of different kinds of Hopi corn, blue, white, yellow, red, purple and mixed. There are at least twelve types of Hopi corn, each with separate ceremonial functions. Grinding corn is a particularly important ritual act for women. At menarche, young girls have a grinding ceremony where they make piki, a wafer-thin flat bread made from blue corn and water. Piki bread is part of the food that the women cook for the various dances and rituals. We saw a piki bread cooker, a thick flat back stone over a fire. Courage and skill is needed to cook the bread because the women cover their hand in the batter and quickly whip their hand over the extremely hot stone. The result is a super thin rolled bread. 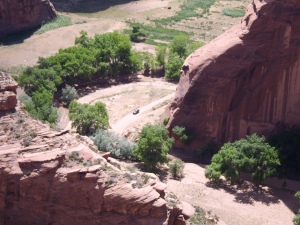