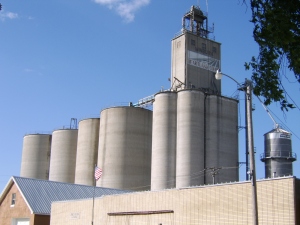 The grain elevator, a corn symbol in every town

I drove to Minburn yesterday where I spent a great day at the Small Potatoes Farm. I past the road to the farm without noticing and stopped at the post office, next to the grain elevator, to ask for directions. A good choice because the post office, I soon realized is the epic center of this tiny town. So a few minutes before my arrival, the news was announced by the post office, calling to the farm that a tall Dutch lady was coming over.

We harvested more than 5 different varieties of garlic. If it would have been not such wet weather so far, the harvest would have been in already around the 4th of July. And even now, the land was quite wet, which meant that the garlic bulbs came out with big lumps of soft black earth hanging in their roots. We pulled, collected, cleaned and trimmed the garlic bulbs after which they were let to dry hanging in the barn, in bundles of eight. Each variety had its own place in order not to mix them up, and we indicated what we hung on a map. Of some varieties we only harvested a basket full, just to grow more seed. 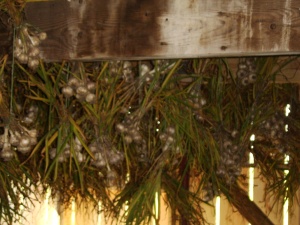 The Small Potatoes Farm grows an incredible amount of different vegetables and different varieties. These include different kinds of: squash, melon, potato, eggplant, peppers, tomatoes, lettuces, unions, leek, cabbage, beets, kale, beans, strawberries, asparagus and herbs. The total amount of hectares available for production is around 4.5, however at any point in time, there is 1.5 hectares in production while the other acres have a cover crop such as buckwheat to increase soil quality and organic mass. 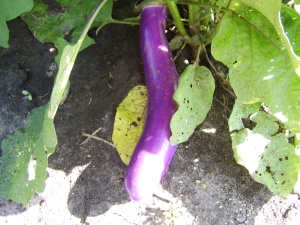 When you see the rows of different crops weaving in the wind, you wouldn’t think there is much mathematics involved. However, the production planning system is a complicated multi dimensional puzzle. While rotating land out and into production and rotating the right kind of crops after one another to minimize disease, there also has to be a certain kind of yield available every week throughout the season to give the CSA members their vegetable share. And, of course, this share demands a certain kind of diversity too. A puzzle for winter times,  when a thick pack of snow is covering the land.