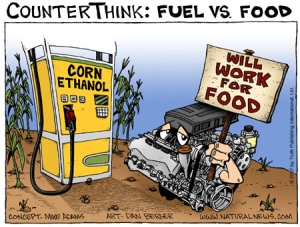 In the current second year Bsc course ‘Agrarische en rurale ontwikkeling; sociologische perspectieven’, students have to make assignments in groups connected to documentaries which subsequently provide input for discussion tutorials. During the first week we worked with the concept of ‘paradigm’ and compared current competing agro-food paradigms. The agro-industrial paradigm (see e.g. Ploeg 2010) and the integrated-regional paradigm (see e.g. Wiskerke 2010).

It led to interesting discussions on feeding the world and the future of our resources. Very remarkable was that the integrated-regional paradigm changed names in the student reports to the ‘traditional’, or ‘local & artisanal’ paradigm. When asked, this turned out to be no conscious choice. It revealed implicit images of the integrated-regional paradigm which influences judgements about the feasibility of this alternative. It also revealed that the practice and future potential of this paradigm is still partly unimaginable.

Earlier this year, other Msc students went to see the integrated-regional paradigm in practice in Hemmen, just at the other side of the river Rhine. Here, several entrepreneurs in organic agriculture and retail are integrating their businesses while keeping their independence and are regionalising their practices step by step. This may still sound abstract. A true explanation needs more than one blog. Here, for now an example of what ‘integrated’ could mean.

Organic arable farm Lingehof (aprox. 80 hec. and 14 mainly contract crops) includes in its rotation scheme space for the gardeners of the Stroom, who run an organic vegetable box scheme for approx. 200 households. Together they also make it possible for people to adopt a (high-stem) apple tree. The dairy farm Opneij and the Lingehof together function as a mixed farm, exchanging manure and straw, rotating grassland and fodder crops. Organic shop the Smidse sells vegetables from the Stroom, meat from Opneij and bread from wheat of the Lingehof. Last year they also started collaboration on another level through the ngo Stichting Hemmens Land (and see earlier blog). One of the activities of this ngo is to set up thematic excursion arrangements to offer groups (such as the Wageningen students) the possibility to visit all involved entrepreneurs around a coherent (educational) program such as closing the nutrient cycle. This can be seen as an integrated (farm)diversification strategy and will create a source of extra income.