The University of Agricultural Sciences Bangalore (‘UASB’, in Hindu it is named ‘GVKV’) is ‘associate partner’ of the IMRD consortium. This International Master of Science in Rural Development (‘IMRD’) is an EU funded Erasmus Mundus Program, which originally (it started in 2004) was meant for non EU students to enter an European Master program. Since then, the program became more and more popular; also because it was opened for European students. But more changes took places and put the IMRD into the pictures: since some years, the IMRD not only has full partners (through the Atlantis program) in the US (Florida and Arkansas), but also cooperates with so-called ‘associated partners’ all over the world. These partners are in South Africa (Pretoria University), Beijing (China agricultural University) and Ecuador (Espol). 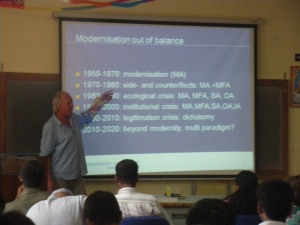 Students who enter into the IMRD program, have the opportunity to do a ‘specialized module’ in one of those ‘associated partner universities’ (the other 3 semesters has to be chosen out of Ghent, Berlin, Rennes, Nitra, Pisa or Wageningen). In this (‘spring’)semester, 3 IMRD students are in Bangalore: two of them (Basavaraj and Lauren) for their thesis (doing their data collection in India), and one (Tungaa) for the specialized module in agricultural economics.

And I am there too. I just arrived, and it feels like ‘Kuifje in India’. If you don’t know what it means, read the comics on Rintintin (“In Africa”, or “In the Soviet Union”), or read my notes which I will post the coming days on our RSO weblog. Arriving in Bangalore as a ‘visiting professor’ without too many preparations, it quite a ‘culture shock’. Not just because of the language (who told me they speak English in India?!), the climate, the food, the names, the conventions. Name it, it is different from ‘home’. A minor thing to mention: if people agree, they shake (or waggle) their head. It still confuses me that much. Another thing: if you meet somebody, they don’t say hello. They greet by asking: “did you have lunch”(or breakfast or dinner), and in general: “did you take some food”. I thought it was a real question, so I always answered seriously about my ‘eating habits’ (a long story….).

But that’s not the reason why I’m writing this blog. Next issue I will tell about life at a campus in India (I’ve been hosted in the ‘International Students Hostel’), about an University of Agricultural Sciences in Bangalore, about ‘global and local’ (the title of one of my seminars is called: “the horizon of relevance”), and above all: about life in India and the exchange of ideas, knowledge and expertise. But now I have some food first (vegetarian, because almost the whole of the Karnataka State is so). Although I am ‘heavy’ carnivore, I have no problem with eating here in Bangalore: I’ve never tasted such a delicious food so far in my life!