Florian Neubauer is working on an M.Sc. Thesis with RSO titled `Understanding changes in land tenure and livelihoods among the pastoral Maasai in southern Kenya´. Here he shares some reflections from his field work. All quotations are either taken from interviews or from informal conversations. Florian’s first post can be found here. 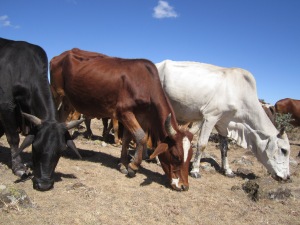 Still what it is all about? – Maasai cattle

He slants his head, looks at me and smiles. I don’t know what he is thinking. Is he reminiscing? Does he feel sorry to disappoint me? Or, is he amused by the naivety of the mzungu, the `white´? `We don´t have something like that here anymore´, he says after some time. I am sitting in the homestead of an old Maasai man, having a cup of tea with him. I am somewhere in the remote area of Kajiado County in southern Kenya at the very beginning of my first trip to the research area where I am currently collecting data for my thesis. `And where can I find one?´, I ask him. `There is only one left here in this area, but you have to travel. Far.´, he says, `you will eve

n need a car to go there´. What I am looking for is a manyatta, a traditional Maasai clay hut. I was looking for one for days already and in the end it will take me more than an entire week until I will have found one.

If one would expect manyattas, morans (Maasai warriors) wearing shukas (traditional Maasai clothes) or young Maasai equipped with spear, knife and rungu (some kind of wooden axe) preparing to face and kill a lion in order to become a moran, one would probably be quite surprised, as today the Maasai are more marked by mobile phones, jeans, television and corrugated-iron huts.

It has been some 2.5 half months, since I arrived in Kenya and after several weeks in the field it seems to be an appropriate time to summarize some first findings and reflect particularly on some (changing) aspects of the Maasai culture in the research area.

Since the subdivision of the local (communally owned) group ranch some 25 years ago and – as a consequence thereof – an increased privatization and individualization of land (title deeds respectively), the Maasai pastoral culture seems to have changed drastically. Certainly, culture as a concept is not anyhow something like a stable given condition, something that has always existed and remains. Culture might be regarded more like a process, a protracted – maybe centuries-long process – of continuously changing practices, customs and perceptions. What makes the case of the Maasai, especially in this research area, hereby a particularly interesting case to investigate is the fact that some (perceived) cultural changes seem to have taken place and are still taking place decidedly quickly within a very short period of time.

`The drought is a killer´ – A victim of the drought

Fencing of private land is increasingly taking place in the area

Some (preliminary) findings from the field:

Located only around 60 kilometers south-east of Nairobi and 20 km north of Kajiado – the former district capital – the research area faces a high demand of all kind of land investors: foreign companies, other Kenyan tribes and local investors. The right of a Maasai to sell land individually is rather new and increasing prices and an apparently high demand provide a wide range of opportunities for Maasai to sell their land. Although, they partly participate in land selling practices, many investigated Maasai households regard the selling of land, especially to non-Maasai buyers, as a rather negative outcome of the privatization of land title deeds. People from other tribes purchasing land in the area are often regarded as an influx and cultural threat to the Maasai. Hence, many Maasai title deed holders (especially older Maasai), try to develop different strategies and practices to resist and avoid future sales of their land, once they will have subdivided it among their descendants; e.g. by increasingly considering their daughters in heritage practices, as some regard women as more restrictive in selling land than men.

Due to increasing land sales and fencing of land, the availability of graze lands for Maasai cattle decreases, although partly various forms of arrangements and agreements between neighboring privately owned Maasai homesteads to mutually access each other`s pastures exist. Fencing has herby as twofold impact. On the one hand fences exacerbate strategic migration of herds looking to access pastures in more distant regions, as accessing or trespassing fenced land is often restricted. On the other hand, fences serve to preserve and protect grass (and hay) and therefore contribute to reduce the vulnerability of cattle during drought times. Hereby, most Maasai households which fence parts of their land, preserve grass in order to delay and – if possible – to avoid migration completely during drought times. Accordingly, long distance migration, formerly one the distinctive elements of Maasai livelihoods, is decreasing in importance as a coping strategy during stresses such as the current drought in the area.

As a consequence of land privatization, land fencing and selling – and accordingly of a decrease of available pasture land – changing cattle keeping practices and – possibly – changing (cultural and economic) meanings of keeping cattle per se take place. The amount of available privately owned land is currently (mostly) the determining factor of how many cattle a household can sustain. Accordingly, land now becomes `manageable´. And although the number of cattle seems to have decreased per household over the past years and decades, keeping cattle remains for many Maasai the most important source of income to maintain a living. However, the cultural meaning of keeping cattle as a sign of prestige within a Maasai community is changing. Retrospectively asked – not the amount of cattle a Maasai keeps, seems to be of decisive importance anymore, but simply the fact that a household keeps (some) cattle.

The selling of land provides a rather fast and simple way for some Maasai in the area to acquire partly considerably financial means. Many Maasai for instance plan to reduce their dependency on seasonal rain by drilling boreholes and constructing dams in order to use the water for both: the cattle and cultivation. Cultivation with irrigated fields does hereby play a crucial role in maintaining food security for a Maasai household throughout the entire year – either by providing a new source of income, when farming products are sold, or for a household`s own consumption, when agricultural yields are stored for bad times. Furthermore, some Maasai increasingly invest money obtained from land deals in real estates in nearby towns in order to create new, season independent sources of stable income for their households.

`Our culture is being eroded´ – A threat to Maasai culture?

All these examples mentioned above have and / or are perceived to have an impact on the Maasai pastoral culture. Is it the potentially changing (economic and cultural) meaning and importance of cattle, reduced or given up migration practices, the increasing importance of cultivation or the (perceived) loss of land (to other tribes), all these developments impact Maasai pastoral livelihoods and (are perceived to) shape Maasai culture. As mentioned above, what makes the case of the Maasai in this area maybe unique is the rapidity in which these changes seem to take place since the subdivision of the group ranches only around 25 years ago. Furthermore, some of the investigated households and interviewed Maasai seem to be very aware of these changes – the (perceived) threats as well as the (perceived) opportunities. It is this alleged contradiction between perceived threats to their Maasai culture and the new livelihood opportunities they benefit from, that might be one of the strongest interfaces to identify current cultural changes. And although some of these changes and developments are partly not appreciated and even create various forms of resistance by some Maasai, most of the investigated households explicitly participate in these changes – probably trying to find their individual way between using these developments as new livelihood opportunities on the one hand and trying to persevere their Maasai culture, they are so aware of, on the other hand.

In the third blog post, I will present the final scientific results of the research and outline the points exemplified above and other findings more detailed. 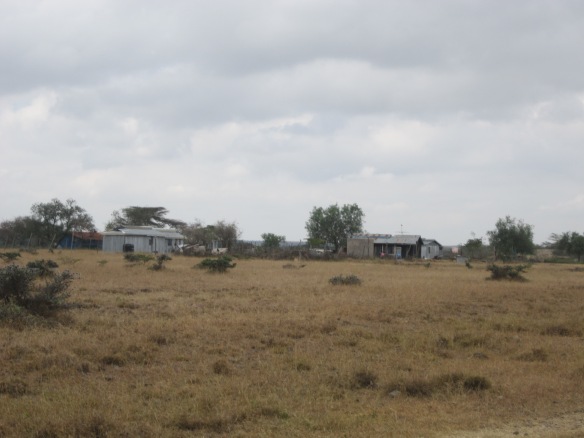 Maasai homestead in the research area

The way to go? – A small irrigated field of a Maasai homestead

2 thoughts on ““Our culture is being eroded”: 2nd report from the field”