Eva de Groot wrote an essay about food forests and how this phenomenon is gaining momentum in the Dutch agriculture. In this blog she shares some of her findings.

First things first; what are food forests? Food forests imitate natural ecosystems by combining trees, crops and livestock that work together. In a monoculture only one layer is used for the production of food; a food forest is a polyculture with many more layers, for instance with shade trees, shade-tolerant vegetation and herbs (see figure 1). Agroforests contain around 75% of the species that are found in the natural forests in that particular area. Therefore food forests are good for wildlife conservation and for the maintenance of healthy agroecological functions. Food forests can be seen as one of the many faces of permaculture. 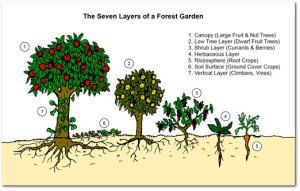 Historically lots of food forests were settled in more tropical climates. Due to lower temperatures and less sun it is more difficult to design a productive food forest in more Northern countries. Furthermore most farmers in Western countries are used to monocultures and know little about farming in a polyculture or – even more varied – a food forest. Due to more knowledge, it is nowadays possible to create a productive food forest even in the colder climates like that of the Netherlands. 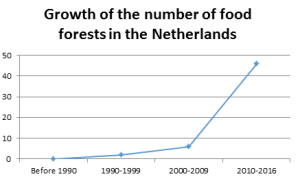 For this essay I visited three different producers who own a food forest to ask them about their motivations and goals with the food forest. Interestingly, none of these producers has a background in farming. They all started a food forest because they were inspired by the concept.They have different goals they want to achieve with their food forests, however, like research, production, enhancing social contacts or education.

Overall, food forests have been proven to be an upcoming and interesting phenomenon in the Netherlands. It seems possible to live from these kinds of forests, even in colder climates like that of the Netherlands. Nevertheless, still a lot has to be done to make food forests production common in the Dutch landscape of agriculture.