The last few days I jointed the fieldwork which Cornelia and Jan Flora are doing with their master students in Columbus Junction on the Hispanic immigrant communities.

Ever since the free trade agreement with Mexico, there has been an influx of rural Mexicans displaced because of US corn export. Predominantly Mexican but also other Latin American migrants came to work in agriculture and the related agro industry. In Columbus Junction for example, they work at the pork meat processing plant now owned by Tyson. The way the agro-food industry is operating here is capitalism in its most raw form. Tyson does not allow any visitors so we cannot interview there. But a community health worker whom we spoke to last night told us about the bad working conditions in the plant. A lot of accidents happen because of having to cut too fast in understaffed lines. Another example is a very large farm where temporary migrants are housed in a warehouse with very poor facilities.

Some of the legal migrants, however, see a chance to start their own business. In fact, the main street in Columbus Junction has most of its shop signs in Spanish and we have been eating tacos, fajitas and other good Mexican food, among which at this bakery.

Aim of the fieldwork is to better understand how entrepreneurship and innovation impacts new immigrant communities and to see what further can be done to sustain these communities. To find out how the communities works, what the structures and networks are, and what kind of resources people can draw on in developing their businesses we interview all Hispanic business owners. Knowledge of the Spanish language came in handy when interviewing three different shop owners yesterday, with Diego doing the talking and me taking notes (as well as taping i 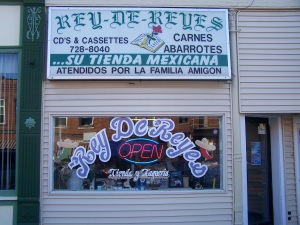 There are four cases being studied, this town we are now in, West Liberty, Marshalltown and Denison; all in Iowa. There is a comparative study being done in North Carolina by East Carolina University. The towns differ greatly in how vibrant community life is, with West Liberty having the most new community and entrepreneurial activities. Somewhat counter intuitively this is the town with the largest Hispanic population in relative terms, and the factors contributing are being studied in a comparative way.

The coming two months, I will join the North Central Regional Center for Rural Development in Ames, Iowa. This center, part of the Iowa State University, is working with rural communities, native American communities and small producer groups to increase the capacity and resilience of these communities in tackling their problems. In the United States, the development of modern agriculture had a large impact and often devastating effects on rural communities. And, nowadays changing lifestyles, declining knowledge of food and less connection with farming and land have resulted in an obesity epidemic and diet-related diseases. Native American communities also suffer from diet-related diseases. One of the communities the center works with is a Hopi community in Arizona. A recently finished project worked with Hopi women to search for how they define, access and use traditional Hopi food. Using a community capitals approach, the participants assessed together their natural, cultural, social, political, financial and built capital. Through this, they identified their strong and weak or lacking capitals in search for improving health and living circumstances. See this website for an example of a Hopi farm.