Since the ecological movement came into being in the sixties, organic farming has kept on developing and now has a history of half century in the Netherlands. Today’s organic farm is different from what it was in the beginning. Some ‘modern elements’ have been added, but the underlying social and environmental principles are still the same.

After doing some readings and interviews about organic farm in the Netherlands, I finally got the chance to experience a real, tangible Dutch organic farm. The farm I visited is located in the famous Dutch ‘polders’ in the Flevoland province, and produces mainly vegetables. It has 75 hectares of land, which is bigger than the average organic farm in Holland. Even though it has no plants or work in the field during wintertime, still I have experienced and seen a lot, especially regarding energy- and labour use on the farm. It’s easy to notice at first that some fuel-based and electricity-based machines were used for planting, harvesting and washing vegetables, which is kind of out of my imagination. But also the so-called new energy – solar energy and methane – are used here. 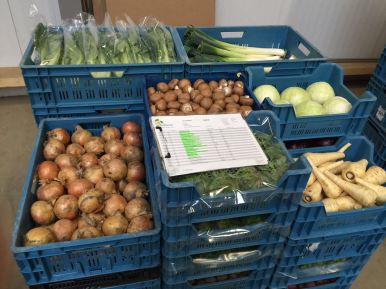 I worked on the giant washing pipeline to pick out some of damaged or ‘ugly’ carrots. These picked-out carrots were not being wasted, instead, part of them would be sent to some diary farms feeding cows, and in exchange, the organic farm could get cow’s waste using as fertilizer in the field; part of them would be dumped to methane tank for fermenting. In this way, the organic farm internalized its waste and connected its output and input as an ecological circle.

The good carrots that were transported by the pipeline into plastic boxes finally would be distributed in three main sales channels, whole sales, sales and directly to consumers. Actually the organic farm began to sell its vegetables directly to consumers two years ago. There were about 70 families who lived in the city organized as a group and they had a web shop to order fresh food for each family (See an earlier post by Potira Preiss for more info on that). BioRomeo was established to collaborate with other organic neighbouring farms to provide consumers organic food. This direct connection between organic farmers and consumers, so called short food supply chain, actually benefited both sides. Organic farmers can get higher prices for their products and it can also save more energy compared to traditional sales to dealers since less transporting and packing is needed in this way. What’s more, usually the farm need to hire more workers to pick and pack organic food to consumers, which could provides more jobs on farm level. And Consumers pay lower prices for their food, fresh food. Also, these consumers in the group can build their tight connection to each other by doing volunteer jobs in turn, and form an organic consuming community.

This is just a glimpse of an organic farm in the Netherlands. Its practice of social and environmental sustainability impressed me. Of course there are a lot of other creative ways for organic production and distribution, but it is the way in which innovation, enthusiasm, and diversity are included, that makes organic farming fascinating.

Tian Yu is a PhD candidate in Wageningen University and studies organic farming and rural development, especially on energy use and labor use on organic farms. You can contact Tian by emailing him.