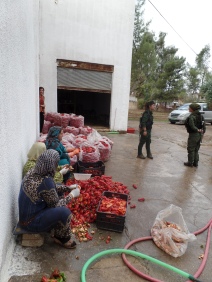 In one of our previous blogs we discussed Van der Ploeg’s concept resistance of the Third Kind (see Anniversary Blog 7). This was defined as a resistance which resides in working practices and farmers’ fields and is expressed in the way that cows are bred, how manure is made, products are delivered. In short, it is a resistance which intervenes in and reorganizes production, reproduction and markets (Van der Ploeg 2007). In this blog, the reconstruction of Kobanî is discussed a resistance of the third kind.

In the night of July 18–19, 2012, the People’s Protection Units (Yekîneyên Parastina Gel, YPG) took control of Kobanî, an agricultural town with a population of 50,000 in Rojava, the Kurdistan region in Syria. The revolution in Kobanî, as it was referred to, quickly spread to other cities and towns in the Kurdistan region resulting in the establishment of the Rojava autonomous administration (Knapp, Flach et al. 2016: 54-55). Given Kobanî’s strategic location on the international border with Turkey, the Islamic State (IS) attempted to take the town on several occasions in 2013 and 2014. In September 2014, following the fall of Mosul in Iraq, IS resumed its siege of the border town, bringing in heavy weapons and fresh supplies captured from the Iraqi military in Mosul. As a result of the military superiority of the IS, the YPG defense had become cornered in the north-west of the city by the end of October, controlling just a few blocks around the border-gate. Then, following the start of US aerial support, the YPG along with the Women’s Protection Units (Yekîneyên Parastina Jin, YPJ), and supported by some fractions of the Free Syrian Army, managed to force IS to retreat and declare the city liberated in January, 2015. IS had suffered its first defeat, but Kobanî had been devastated and its agriculture destroyed. Together with the reconstruction of Kobanî, the land had to be re-cultivated and markets reestablished. One of the defenders of Kobanî, Azad Cudi, described in his account of the war how even while still in ruins, the town immediately showed signs of this resurrection:

“The way Kobanî sprang back to life after the war was astonishing. Each morning, the vegetable and food growers in the bazaar made displays so full of life as to suggest a lingering anxiety over whether this new-fangled idea called cultivation was going to work. Stalls would be piled high with lemons, prickly pears, pomegranates, black grapes and oranges, while small rock falls of watermelons sat to the side. The next row would be a mosaic of turnips, potatoes, beetroots, carrots and white-and-fuchsia radishes. In another alley were the market’s true gains: tomatoes the size of small pumpkins, and cucumbers, red and green peppers, and shiny black aubergines the length of my fore-arm. These would be penned in walls of lettuces, mint, dill, rosemary, and parsley. Yet another alley would be lined with buckets of green and black olives stuffed with chilies and garlic, great sacks of peanuts, walnuts, pistachios, and hazelnuts, and spice stalls heaped with miniature hills of dried chili, scarlet paprika, and turmeric”

“As I wandered the markets, I inhaled the smell of sweet black tea, cigarette smoke, lamb stuffed with apricots, and my favorite grouse, roasted with honey and cinnamon. In the end, I came to see Kobanî as a gigantic village. My alarm each morning was the sound of a cockerel. My view was a row of houses made of home-sawn wood and corrugated iron. Every backyard seemed to contain a cow or a goat.”

“When I think of how we withstood the Islamists, I think of Kobani’s stubborn farmers. What anchored us all, fighters and farmers, was a connection to our land. With careful shepherding and untiring care, we had nurtured a rich and varied life from this meagre earth” (Cudi 2019: 16-17)

In this vivid recollection, the reestablishment of the market for agricultural produce becomes symbolic for the way in which the city returned to life.

The war against the regime and IS received extensive international media coverage, but negligible attention was given to the reconstruction of the region after its liberation from the Ba’ath regime and the defeat of the “caliphate,” let alone the political principles underlying this reconstruction of the agrarian economy. The reconstruction focused on the development of a social economy through a redistribution of land, the development of processing, manufacturing and distribution, establishment of regional markets and exchange of labor and products on basis of a fair price. The agrarian policy promoted peasant production and the formation of cooperatives, as part of a wider approach referred to by the concept of social ecology, an approach which holds that relations of domination are the main cause of the social and ecological problems of our times. In one of our previous blogs (Anniversary Blog 7), we referred to this as a resistance of the Third Kind: a resistance to domination and submission which resides in working practices and farmers’ fields (Van der Ploeg 2007).

In Rojava, food provisioning became reorganized on a regional basis. Syrian regime regulations that had prevented farmers from cultivating their land as part of an Arabization policy and the development of large state estates were declared null and void. Relatedly, a process of peasant dispossession had been reversed. Resources were provided to support farmers, ranging from fuel to chemical and organic inputs, and a less water-intensive agriculture was promoted (Barbagli, Steinmetz et al. 2018, SIM 2018). Moreover, facilities were established at the municipal level to stimulate processing and manufacturing. As a result, a diversification of production took place. The turn towards a diversified agricultural production system was twinned to a policy of stimulating regional markets and fair price for both producers (peasants and workers alike) and consumers.

The imaginary emerging from these attempts is that of a networked-economy: a myriad of interrelated short chains, which connect productive capacity with consumptive need within the region, but also stretches out, and which is organized on basis of a principle of fairness. One of the challenges we face in the years to come is to better understand and learn from such practices and the underlying organizing logic.