On Thursday 22 June 2017 at 11.00 hrs Marc Wegerif will defend his PhD thesis entitled ‘Feeding Dar es Salaam: a Symbiotic Food System Perspective’ in the Auditorium of Wageningen University. The ceremony will be live streamed by WURTV but can be viewed later as well.

The full thesis will be available online after the defence ceremony.

Marc is currently Land Rights Policy Lead for Oxfam and based in Johannesburg, South Africa. Before that he was in Dar es Salaam (Tanzania) as Food and Land Rights Advisor for Oxfam with a focus on Horn, East and Central Africa. During that time he also undertook the fieldwork for his PhD thesis.

His thesis is based on qualitative research that explored the food system which feeds most of the over 4.6 million residents of the fast-growing city of Dar es Salaam in Tanzania. Marc followed key foods (maize, rice, potatoes, green vegetables, eggs and milk) from the urban eaters to the retailers, processors and primary producers.

What has been found is a “symbiotic food system” made up of multitudes of small-scale and interdependent actors that together produce the food and get it to urban eaters at a city feeding scale. They do this without any vertically – or horizontally – integrated corporate structures.

The symbiotic food system that feeds Dar es Salaam is not perfect, but it is working and worthy of further research and interventions to create a more enabling environment for such foods systems to flourish in Tanzania and elsewhere.

Just published in a Special Issue of Agriculture: ‘The Symbiotic Food System: An ‘Alternative’ Agri-Food System Already Working at Scale‘

In this new article Marc Wegerif and Paul Hebinck show how small-scale and interdependent actors produce food and get it to urban eaters at a city feeding scale without large vertically- or horizontally-integrated corporate structures. The research from Dar es Salaam, a city of over 4.5 million people, reveals a ‘symbiotic food system‘ that is an existing alternative to the globally dominant agri-business model. Importantly, it can and does deliver at scale and in a way that better responds to the needs of people in poverty; both food eaters and food producers. Neither is the symbiotic food system static, it is growing in response to the needs of the city, but it does not grow through the popular notion of ‘scaling-up’, rather it grows through a much more equitable process of replication. The article gives particular attention to the functioning of market places and how new actors enter into the food system. These reveal that more important to the system than competition are various forms of collaboration based around symbiosis as a core ordering principle. Moreover, the paper shows that the symbiotic food system connects in many, often unexpected, ways the urban and rural spaces in Tanzania. There is much to learn from such a system which develops without significant support from the state or other agencies.

Also published in this Special Issue: Theorizing Agri-Food Economies by Jan Douwe van der Ploeg, discussing how agri-food economies evolve over time. A central thesis of the paper is that different theoretical representations not only reflect the differences in agro-economies and their developmental tendencies, but are also important drivers that actively shape the trajectories that they describe. 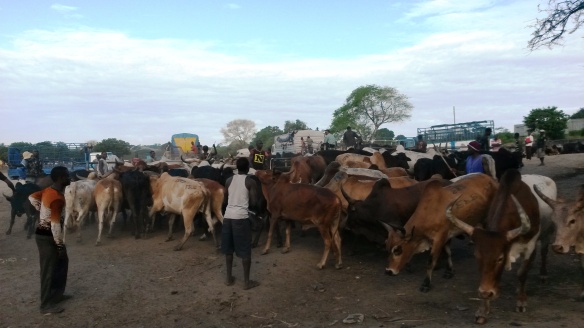 It was a Sunday afternoon, I sat at a table drinking beer and eating a grilled goat’s leg with Larry and Samuel. We were at the Pugu cattle market on the edge of Dar es Salaam and my companions were and are meat traders, butchers I suppose, there to buy some cattle. Dar es Salaam is Tanzania’s largest city with a fast growing population of around 4.5 million making it a major market for animals from across the country. From our table in the shade we could see groups of cattle and observe negotiations going on and the odd fight between bulls and arguments between traders. END_OF_DOCUMENT_TOKEN_TO_BE_REPLACED

It’s Saturday morning in Dar es Salaam, no rushing to school and work today. I walk to the duka (shop) a few metres from my house, (you can read more about the duka in http://www.mdpi.com/2071-1050/6/6/3747). After greeting the shop owner and another customer standing at the counter, I buy eggs, chapattis cooked that morning by one of my neighbours and fresh milk in a plastic half litre package for 1,100 Tanzanian Shillings (Euro 0.52). Ready for breakfast and I think it is time to write a few lines about where the milk I just bought comes from.

On a morning a few weeks earlier I was standing in Pongwe Village, Tanga Region, watching as buckets and other containers of milk were lined up at the Tanga Fresh milk collection centre. Most of the containers were brought by young men on bicycles and motorbikes, women of all ages came on foot buckets on their head or in their hands and some older men were there as well. Tatu (not her real name), in her twenties, dressed in a clean white coat, hair net and boots – the classic uniform of hygiene – was taking samples from every container to check the quality of the milk and for any impurities. The milk that met the standards (most of it did) was poured into a shiny stainless steel container, weighed, then filtered before being put into one of two large shiny and cooled tanks in the back room of the building. Later in the day a truck would collect the milk and take it to the Tanga Fresh dairy. END_OF_DOCUMENT_TOKEN_TO_BE_REPLACED

The paper examines food provisioning in Dar es Salaam through a focus on the egg trade and finds that there are existing, non-corporate, patterns of food provisioning that can sustainably meet the needs of eaters in this city of over 4million people. Below I explain why this is important. 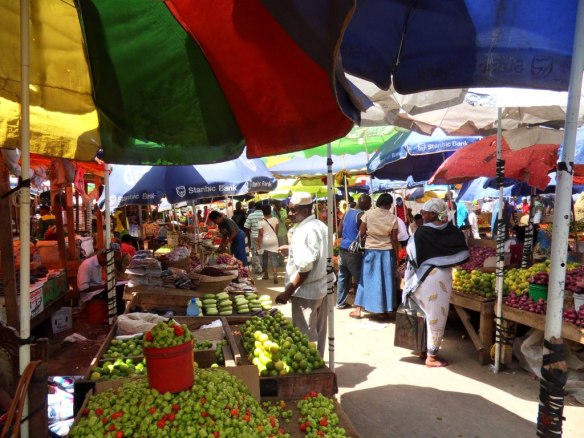 END_OF_DOCUMENT_TOKEN_TO_BE_REPLACED

Diagrams made by Jerryt Krombeen, a freelance designer and advisor working with own company (http://jerryt.nl/) on: design, urbanism, landscape architecture, and public space. Jerryt is completing his Masters at the Amsterdam Academy of Architecture (http://www.ahk.nl/en/architecture/ ) and joined a group of students in a project on planning for food markets in Dar es Salaam.

It is 5am, still dark, I am at the Shikilango people’s market in Dar es Salaam, a variety of vehicles are arriving and stopping in the street next to the market, the clucking of chickens fills the air. Motorbikes with two large woven baskets on the back, tied on top of each other, park. The baskets carrying up to 50 chickens each are arranged on the ground. Small Suzuki pick-up trucks and other vehicles with wood and wire frames on the back arrive with hundreds of chickens, the various buyers crowding around them as the morning business picks up and the sun begins to light the sky. Some customers are buying directly from the vans and motorbikes. Some of the butchers, identifiable in their white overalls and boots, are also buying direct from the vehicles to fill orders they already have. I watch the scene while sitting on a large rock on the edge of the road. The man sitting next to me on the rock is selling plastic bags of different sizes and cigarettes to customers and traders. Most of the people with the vans and motorbikes also have a stall in the market or cooperate with someone who does. The chickens not sold directly in the morning are transferred to the market and sold there through the rest of the day.

Under a high roof that covers a raised concrete platform there are thousands of chickens in lines of cages four levels high. The alley ways left between the cages are busy with people selling and buying chickens, negotiating or just talking. There is an alley at a lower level between the platform and six white tiled chicken slaughtering and cleaning areas that run along two sides of the platform.