The Brazilian School Food Program underwent a lot of changes and, as posted earlier, the biggest change is related to localisation of the school meals. Previously, national menu’s with national tendering contract for enormous quantities to which only big companies were able to bid competitively were what the program was about. To give an idea, for 2010 the estimation was a total school food procurement market of 3 billion dollar providing food for 47 million students. Now cities and municipalities are responsible for contract tendering and supply selection. This has created opportunities to shorten the food chain although many municipalities still follow the logic of mass production and long supply chains (Triches and Schneider 2010). Therefore, additional Law 11947 created the rule that 30% of fresh produce has to come from the ‘family farm’.

Opportunities, but it has also created challenges. At municipal level, capacity is now assumed for things like the nutritional balance of menu’s based on local products, the legal process of tendering and supplier selection with many more suppliers and overseeing the many other issues such as logistics. Not all municipalities do have this capacity yet. Equally, not all ‘family farmers’ are equipped to supply particular quantities and collaborate with colleague farmers to meet demand.

However, in the State of Rio Grande do Sul many good examples can be found too. One of these is the school food program in the city of Dois Irmáos (see also Triches and Schneider 2010 in Portuguese). The municipality created a municipal ‘huerta’, a vegetable production garden which produces almost all greens for the school meals. Furthermore in collaboration with Rural Extension a pool of 160 family farmers is working with the program. Every 6 months, the municipality calls a tender to buy its supply for the coming half a year. Each time, 10 to 15 farmers of this pool are selected to supply foods like potatoes, onions, milk and meat. Although the bureaucracy involved in this tendering process is one of the biggest problems, the family farmers are not subject to the same legal scrutiny as is normal for other products. Buying from family farmers is done through a separate program PAA (Food acquisition program) where a certificate is needed which proves that the farmer can be classified as a ‘family farmer’ but where the language is different and the product descriptions simpler such as ‘salad’ or ‘potato’ rather than a legal description. The after-school which we visited invested in its own meat-cutting room in response to buying fresh meat from local farmers. Local nutritional studies show that the children like the meat and other food better. 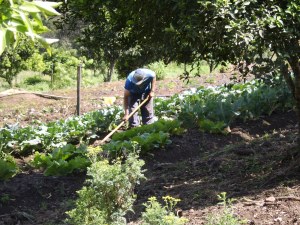 Last week, I was invited to the Animal Science Days in Padua to present my Master thesis results concerning the effect of farm modernization on the welfare of pigs in Croatia. I was given the opportunity to present my results twice; first, I presented my main results as an invited speaker and later I presented some aspects of my thesis in the form of a poster.

The main point of my study was that the modernization of Croatian housing systems, particularly small ones, does not necessarily ensure a better standard of pig welfare. This is because it often entails the removal of bedding and intensification of production, amongst others to reduce labour time and costs. Bedding such as straw is, however, important because it reduces injuries resulting from behavioural abnormalities directed towards pen mates (i.e. belly nosing, ear and tail chewing) and floor qualities. Also, across Europe intensification has risen much concern regarding the welfare of intensively housed animals. One can therefore suggest that Croatia needs to find a way to modernise its production units while retaining its beneficial aspects such as small scale and straw bedding.

In the course of my study, however, I found out that small pig farmers-which make up the majority of Croatian pig farmers- often lacked knowledge about the concept of pig welfare and the EU pig welfare directives. In fact, they seemed to be uninformed about the exact changes which will occur in the course of implementing the EU rules and regulations. This resulted on the one hand in frustration regarding their own lack of future perspective and on the other hand in a lack of interest regarding their motivation to ensure or improve the welfare of their pigs. The results thus suggest that motivations to ensure pig welfare are also dependent on the welfare of the pig farmers.

My main conclusion was therefore that in order to ensure animal welfare, it is necessary to ensure welfare of farmers as well. In order to ensure and improve pig welfare in the future, this topic needs to be approached from both social sciences and animal sciences in order to understand the close link between human and animal welfare. My presentation received great interest from the audience and I hope that this topic will be further elaborated in order to support small Croatian farmers and their pigs in the future.