A group of IMRD-students from different European countries is visiting China this month, doing a case study for their International Master in Rural Development. The first part took place in Nanjing in the Jiangsu Province (200 miles west of Shanghai), where the Nanjing Agriculture University hosted the students for two weeks. Besides lectures by professors from the NAU (who actually knew Wageningen University very well, because most of them did their MSc and/or PhD at the WU!), fieldwork was done in two villages in the rural area south of Nanjing. Together with 25 Chinese undergraduate students from all over China (doing a summer school at the NAU), different households were visited and many farmers (mostly female: so called ‘left-behind-woman’, who’s husbands are migrant workers in the big cities) were interviewed. All information gathered by both European and Chinese students was presented at the university and put together in a final report (soon available on the IMRD-website). 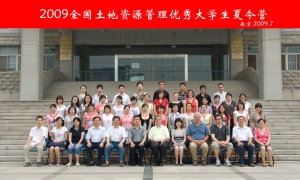 More or less the same program is organized by the Chinese Agriculture University in Beijing (ranked nr. 1’s Agriculture University of China), who is responsible for the second half of the IMRD case study. The COHD (College of Humanities and Development) is hosting us, and also the COHD is a leading centre of excellence on rural development within and outside China. Among others, the COHD is monitoring, analysing and evaluating the new ‘Pro-Farmers-Policies’, as well as the New Countryside Construction Programme (2006). These new policies, programs and measures should tackle the ‘dualism’ between the rural and the urban; a very serious problem threatening China stability as a whole and the future of China’s rural areas more particularly. Part of the New Countryside Construction Program is the Village Development Program (VDP, also from 2006), which will also monitored, steered and evaluated by the COHD.

The IMRD students is given the opportunity to have a closer look at the VDP in an area 2 hours north of Beijing. Fieldwork will be done in 5 days through the use of the PRA-methodology (Participatory Rapid Appraisal) in the Bamudi village in the Yanqing county. With a group of 5 Chinese master students and their professors, farmers, village leaders and others in Bamudi-village will be interviewed and observed by means of several participatory methods.

So far this Case study is really impressive – in all kinds of ways. But: not only me, but also the IMRD-students are getting tired. It’s summertime in China, and in Nanjing (with over 8 million people) and Beijing (almost over 18 million inhabitants) it is 3xH: Hot (over 35 Degrees Celsius), Hazy and Humid, and it’s crowded everywhere. So tomorrow we will leave the city and go to the mountains, where it’s a little bit cooler (although you don’t feel the difference anymore between 38 and 34 degrees). The bad news however is that the mosquito’s are waiting for us, and that there is no internet, no air-conditioning, no shower, no shop, no restaurant nor anything in Bamudi; so it’s going to be a week really ‘doing fielwork’ , and the forthcoming days no more news on our weblog!

By the way: also in Beijing I noticed that Wageningen is rather well-known. Everybody still speaks about professor ‘Jan Douwe’ (they call me ‘prof. Jan’), who visited BAU over a month ago, and who must has done a really great and impressive job, because everyone asks me about him. However, not everyone is really pleased with him; I met a member of the COHD who is (among others) translating Jan Douwe van der Ploeg’s most recently book ‘The New Peasantries’ into Chinese, and it seems to be a ‘hell of a job’. But when it is finished -and that will be within a short period- this book will also be available to at least 1.300.000.000 Chinese people, so well done Jan Douwe!